Complete 1 Burpee the first minute, 2 Burpees the second minute, 3 Burpees the third minute and so on until you can no longer complete the required number of Burpees within the minute.

Complete 1 Burpee the first minute, 2 Burpees the second minute, 3 Burpees the third minute and so on until you can no longer complete the required number of Burpees within the minute. 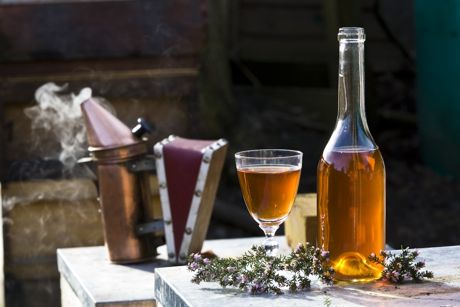 So, I’ve had on-going conversations with our school janitor at Goins, Michael Jordan (not that one) and I’ve learned he is the most intriguing guy to talk to.  He has a life of stories and has held many interesting jobs.  He is an avid bee keeper and my source for raw, Wyoming honey.  He also introduced me to mead, my favorite alcoholic beverage.  Through conversations I’ve learned much about honey, bees, life, and alcohol.  I thought it would be suiting to have him on as a guest writer to tell us what he knows about alcohol (being a home brewer of mead).  So, here’s a blurb her wrote.  Enjoy.  I’ve highlighted the parts I found most interesting.

Alcohol: Drink of the Gods

While no one knows when beverage alcohol was first used, it was presumably the result of a fortuitous accident that occurred at least tens of thousands of years ago.  The earliest alcoholic beverages have have been from berries or honey.  In the Old Testament (Genesis 9:20) asserts that Noah planted a vineyard on Mt. Ararat in what is now eastern Turkey.  In summer, beer and wine were used for medicinal purposes as early as 2,000 B.C.  The Egyptians believed that their gods also invented beer, a beverage that was considered a necessity of life.  It was brewed in the home on an everyday basis.  This was due to the fact that water was not good for drinking unless cooked.  So turning the water into something that could last longer was a high need.  In the sixteenth century, alcohol (called “spirits”) was used largely for medicinal purposes.  At the beginning of the eighteenth century, the British parliament passed a law encouraging the use of grain for distilling spirits.  Cheap spirits flooded the market and reached a peak in the mid-eighteenth century.  In Britain, gin consumption reached 18 million gallons and alcoholism became widespread.  The nineteenth century brought a change in attitudes and the temperance movement began promoting the moderate use of alcohol–which ultimately became a push for total prohibition.  In 1920 the US passed a law prohibiting the manufacture, sale, import and export of intoxicating liquors.  The illegal alcohol trade boomed and by 1933, the prohibition of alcohol was cancelled.

Today there are thousands of kinds of alcohols, with many percentages of the distilled spirits in them.  Many are flavored for taste.  No matter which type it is, alcohol is made all the same way.  Fermenting grain (cooking it in water and treating it with enzymes to breakdown the starch and convert it to sugars) results in an alcohol concentration of roughly 5-10 percent.  The finished concentration or liquor depends on the amount of water used, the grain and the quality of the fermentation.  Fermenting, i.e., the action of micro-organisms (usually yeast) to produce alcohol, break down starch into simple sugars.  Yeast ferments sugars into ethanol, giving off carbon dioxide gas as a byproduct and a waste product of alcohol.  Think of it this way, this bug, yeast, is put into a liquid solution.  Then the yeast eats the simple sugars and burps CO2 and pees alcohol.  When the food source is gone (the simple sugars), the bug (yeast) then dies completing the brewing cycle.  this is how you make alcohol.  The taste may not be good at all, depending on what you used ad the enzymes to break down the starch when cooking.  Potatoes are the larges starch source used for alcohol production, however the most talked about is corn.  to make this alcohol and make the “proof” higher, (proof is the amount of alcohol in a drink), relates to the distillation process.  This is where you heat the alcohol product under boil and remove the alcohol from the water.  The other way is to freeze the liquid and skim the ice off the top, removing the water from the alcohol.  taking water out will increase the “proof” of the alcohol.

What is considered the best alcohol?  Well, the kings and rulers of the world a the time, when alcohol was not a recreational drink, had the upper hand on alcohol.  Distilling was not around, other than a process called arctic icing, so brewing was easy.  you had a grog that was made from the fruits and scraps of the kitchen.  Tasted like an old smelly sock, but the poor were able to make it at home from anything.  Today it is called pruno and is made in your local jails.  Fermenting fruit cups and/ or prune juice, (hence the name pruno), in small amounts to make alcohol.  Your working class drank ale.  It was the beer for all, made from fine grains and hops.  This gave a higher percent of alcohol from the grains and better taste.  Then most of your upper class and land owners drank wine.  Wine was made from fruit grown on the land or given to the upper class.  Very sweet, and do to the large amounts of sugar the percent of alcohol was higher.  Wines were sought over f0r their flavors, colors, smalls, and styles.  this still goes on today with wine lovers.

THEN THERE WAS MEAD.  Mead is made from honey.  Gold in color, sweet, very high on the end of alcohol, and only drank by the kings and leaders of nations.  The rulers of nations controlled everything, even the bees.  All honey was given to the king.  The king gave it out in small supplies for bakers, and home owners to use as the only sugar at the time.  The rest of the honey was made into wine called mead.  Mead was only drank when nations went to war or when they came home from one, if the king’s family members were wedded off, or if a king from another nation came to talk.  The king’s mead was how this nation ran in the eyes of other kings.  If you had lots of good mead, you were a wealthy king.  Your lands were productive (from the pollination make food supplies) the people were healthy and fat, and your cattle were good for they had seeded plants to graze on.  This drink, mead, is the oldest drink and best for you.